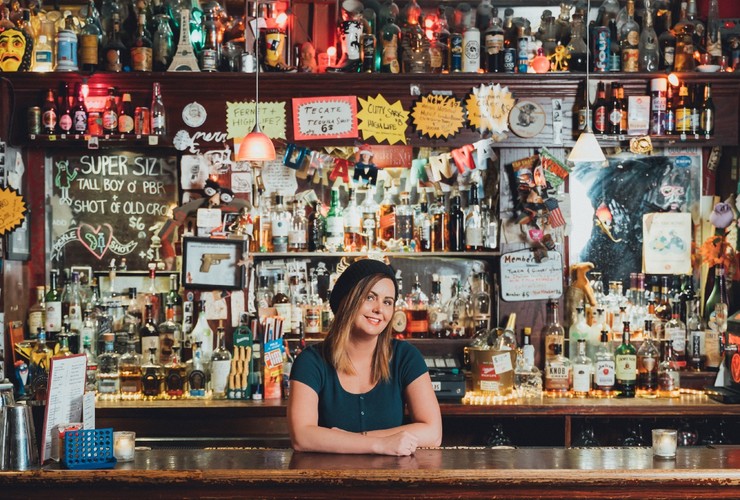 Erin Honto, Tuesday happy hour bartender at Bushwick Country Club, knows most of the people who walk through the door — and their usual drink orders. Upon entry, a regular might pass the busted up banquette in the window, the pinball machine and the Big Buck Hunter, the exposed brick wall covered in art and the bar buried in knick-knacks, and find their go-to stool. Before they even take a seat, Erin will have their drink ready and waiting (plus a few new friends to introduce them to). She makes a particular effort to get to know her customers, which is one of the things she seems to enjoy most about the gig. I stopped by the bar one freezing January afternoon and chatted with Erin — who also happens to be Head of Recruitment for Nooklyn — about the neighborhood, the regulars, and the virtues of cheap beer.

Note: The following conversation has been edited and condensed. Because you really can talk with her all day. Nooklyn Stories: How long have you worked at Bushwick Country Club?

Erin: I’m coming up on five years now. I used to work in set design and I bartended back in college. I actually learned to bartend at a strip club — my friend was a singer in a ska band in the 90s, DJ’ed at the club, and accidentally became the GM. He called me one day and said “I need a bartender,” and I said “I’m not doing that,” and he said “you’ll make rent in a night. Get your butt down here.” So I was like “okay, fine.”

After I was laid off from my set design shop, I was heading home with my desk in my backpack, and I knew my friend Matt was bartending here so I came in. Bawling hysterically. John, the owner, was also here and a week later I had a job. I’ve picked up other shifts over the years — Sunday close was my favorite because all the other bars around here close at 2 AM, and the bartenders would come here and hang from the lights singing Danzig.

NS: So the action was 2am to 4am on Sunday night. Monday morning, really.

E: Yeah. It’s the bartenders’ weekend. You feed them all a shot of whiskey on their way out, they give you a $20 bill and clean up after themselves!

E: Yeah. So then I started working with Nooklyn. When I got promoted I had to meet with the CEO at 9 AM on Monday mornings, and when you’re not getting home until 5 AM, you show up basically looking like death. I just couldn’t do it anymore. So I got rid of Sundays and a couple of the other shifts, but never gave up this one. I’ve had this shift for five years.

NS: And I take it that you’re never leaving?

NS: How much have you seen the neighborhood change while you’ve been around here?

E: It’s amazing how many new developments are popping up. You do see a lot of new places, and some people are moving farther out. I used to live in the East Village back in the day, and all my friends that lived there started to move to Williamsburg and then to Bushwick. But a lot of our regulars have been living here since we opened 14 years ago.

NS: Just because they found the right spot and found the closest bar to it.

E: Yeah. This is the other side of the BQE, which used to mean the other side of the tracks. You had us, you had Duff’s, and that’s pretty much it. We do have new regulars popping in here, and you see more suits coming and going in the morning and afternoon, but the regulars that keep hanging out at these bars are all still the same. Even when they move away, they still come here.

NS: Do you live around here?

E: I do not. I live in Bushwick, right by Maria Hernandez Park. I lived in my old apartment for seven years, and then one day a landlord from work asked me to go price out this building and I fell in love. The location, the price, and it’s a historic railroad apartment. He preserved the original hardwood floors from 1907 but completely renovated everything else and gave me access to the yard for my dog.

NS: Sweet. Are your regulars close to one another?

E: They all became friends over time. They all sit here [gesturing to the corner]. We call it “Squid Row.” It’s grown and changed over the years — we lost two of them, a brother and sister, back to Australia. The brother, (who was called “Squid,” as in “Squid Row”) took off to Spain for a while, then to France. But when he’s in NYC, Squid Row gets its squid back. One guy was here the day they invented the pickleback.

E: They invented the pickleback here. Trademarked. On Wikipedia.

E: We get a lot of people in here because of the pickleback. Or to check out the terribly awesome bathroom.

E: Yeah, the terribly awesome bathroom. It showed up in a top ten worst bathrooms in New York City. And in the summers, everyone shows up for the backyard and mini golf.

NS: Do any of the regulars play mini golf?

E: None of ‘em. They’re over it. They just hang out with people they know. But the mini golf is good for dates. We had a couple of Bravo shows bring dates here for dating shows. And we have Big Buck Hunter. A lot of the members from the league practice here.

E: The girl that’s number four in the world...um…for female buck hunter competitions actually qualified out of this bar.

NS: How many picklebacks does she do? Does she usually drink before she plays?

E: She does drink, but not too many picklebacks. She’ll do her beer and whiskey, usually. Sometimes she’ll do a whiskey ginger instead of the beer and still do the shot — depending on what kind of mood she’s in.

NS: What do you drink? While you’re working, of course.

NS: Ice cold domestics. And a shot of whiskey. Or tequila.

E: That’s my jam. I once spent six months on a cruise ship as a social hostess-slash-assistant cruise director traveling the Caribbean and Mexico. For some reason I was on a weird White Russian kick on the ship, but only on the ship. I don’t remember the last time I had one. Maybe like 5-6 years.

NS: Was there a bad experience?

E: No, it just ran its course. Now I just shoot tequila — oh, and I’m the one bartender that hates hoppy beers. I hate IPAs. I’m like “can you play beer pong with it?” when I taste a new beer. I do not like fancy beers. I like a good sour beer occasionally, or maybe a stout for dessert, but give me a High Life or Tecate and I’m good to go.

NS: While you’ve been bartending for five years, what have you learned about people as a result of getting them drunk and uninhibited?

E: Honestly, I think it’s just that everyone wants to be in love. I see so many bad dates. Tinder Tuesdays. And when they don’t go well and one of them comes back and sits alone at the bar and wallows in their tears afterwards? Oh man. Everybody wants to be in love…or at least get laid.

E: We actually have a guy we refer to as “Buffalo Bill,” he’s a serial Tinder guy that always shows up here. It’s always a different girl. Never the same girl twice. And we actually mutter the joke “it puts the lotion on its skin” because he actually kinda looks like Buffalo Bill.

E: [Laughing] Yeah, there’s another bartender here that plays “Goodbye, Horses” whenever he walks in, every single time.

E: No. The guy has no idea. He hears the same song every time he comes in here and hasn’t said anything about it. But yeah, you can spot a bad Tinder date from a mile away. The one comes in, the other follows eventually, there will be a weird, half-ass hug and “Hiiiiiiii.” Dating is rough, man. I don’t really date, I much prefer sitting up here and watching.